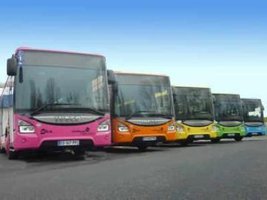 The historic French port City of Dunkirk has embarked on a large-scale social experiment – and perhaps revolution - by becoming the largest city in the world to offer completely free public transport to everyone.

This Autumn, the 200,000 metropolitan population city became the largest city in Europe to offer completely free ridership on its network of brand-new accessible buses. There is no need for any type of ticket or pass, simply show up and ride without restriction.

Strictly speaking, this revolution began in Europe in the historical capital city of Estonia – Tallinn – back in 2013, where residents could purchase a €2 “green card” which provided them with unlimited free access on the city’s public transport network of buses and trams. Visitors still pay €2 for a single ticket on the network of trams and buses.

The main difference in Dunkirk is that the public transport network is free to everyone, all the time. The increase in ridership since the launch is said to have been as much as 50% of some routes, and 85% on others.

Part of the Dunkirk experiment is to make the bus network completely accessible, and so the decision was made to completely remove any need for tickets or passes for any passenger. To coincide with the launch, the city has invested €60m in the bus network, with five new bus lines and have increased the bus fleet from 100 to 140 vehicles, including new vehicles which run on natural gas.  Many of the buses are also painted in bright colours, with new bus-only lanes in order to raise the overall public perception that a bus is an essential tool of modern society.

But while the previous income made from bus fares - which only covered 10% of the actual bus network running costs - now has to be covered from other city budgets, the supporters of the scheme are keen to draw attention to the immediate social benefits. “It may be that the financial cost is too great, but don’t underestimate the social advantage. You can’t put a price on mobility and social justice”, says Patrice Vergriete, the Dunkirk Mayor who promised the free public transport initiate as part of his 2014 election campaign.

The experiment is also very relevant from a holistic Place Management perspective, as greater city and regional accessibility for residents, employees and tourists helps create more inward investment interest, in addition to increased urban mobility, a more inclusive society where public transport is clean, efficient and a real alternative to urban car journeys. Dunkirk is competing with many other regional towns and Places, and such city-wide strategies are highly beneficial for the overall place offering.

The scheme has its critics too, as reports suggest that free public transport will first benefit cyclists, then pedestrians and finally motorists, hence there is no real value to reducing car-journeys around town.

But with the Mayor of Paris now ordering a feasibility study into the possibility of free public transport in the French capital, this quiet revolution could be gaining momentum.