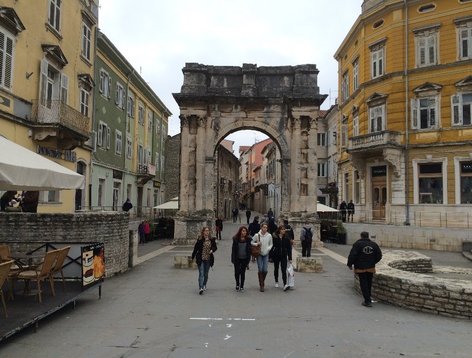 When thinking about the meaning and concept of a city, we often have in our minds tall buildings, lights, crowds and a lot of buzz. If we go back in history when the first cities started appearing, we would see the walls of ancient Aleppo, Varanasi, Jericho and Greek cities.

In Medieval times places were considered cities if they were surrounded with defensive walls. The wall was the basic signature which we would see in today’s modern cities as the city core or centre. Dynamics in development presuppose the socioeconomic context and power in society. That historic infrastructure became the cultural infrastructure that is now known as the historic urban landscape. We say ”landscape“ because it is on the higher level sum of material and immaterial structures.

Urban space is an experienced place (aesthetic experience), a landscape in the broader context, that shows land use and patterns, spatial organization, visual relationships, topography and soils, vegetation and all elements of technical infrastructure. It is a mirror of the level of social cohesion manifested in all mentioned above.

UNESCO has its famous list of world heritage where we can find protected cultural heritage with the values that overcomes its place where it is situated. We therefore have a different categorisation and it is between Historic cities and towns inscribed on the World Heritage list (including whole historic cities and towns, or in part inner cities, historic quarters) and World Heritage sites in an urban context (monuments and sites in an urban territory).

In our work with cultural sector consulting we have the opportunities to develop integrated projects which have in their scope gathering all the significant cultural infrastructure under one vision - the best cultural strategy.

One particular example was the historic city of Pula in Croatia. This particular city, like every other, functions as a dynamic organism. There is no single historic city that didn't change its fabric, that has retained its original character, and that shows the change in society itself. Heritage preservation and the creation of a new heritage goes side by side with the urban planning which means a sort of mapping of the various physical forms within urban areas. It is an holistic approach that will lead to the transformation process that will at the same time to keep the city's memory or ”memento“ and in-filter modern typologies. Each city shows a relationship between history and the present; it's a witness of the history of humanity.

The boost of cultural tourism as innovation in a creative economy emphasises the multipurpose of cultural spaces and here must come a good cultural management of the local community. To boost cultural tourism is not simply about facility renewal and preservation, it is about organisational sustainability, built on the vision and the impact of the future. There are a few basic guidelines that UNESCO find crucial in their approach to maintaining historic urban landscapes:

1. Undertake a full assessment of the city’s natural, cultural and human resources;

2. Use participatory planning and stakeholder consultations to decide on conservation aims and actions;

3. Assess the vulnerability of urban heritage to socio-economic pressures and impacts of climate change;

4. Integrate urban heritage values and their vulnerability status into a wider framework of city development;

5. Prioritize policies and actions for conservation and development, including good stewardship;

7. Develop mechanisms for the coordination of the various activities between different actors.

Good cultural management services and the best cultural strategy should recognise that the urban heritage would be a catalyst for socio-economic development through commercial use, tourism and property and land usage. A city's landmarks and world famous monuments will increase demand and influence in revenue, only if it is properly managed. This is where fourLINK's cultural sector consulting can be vital.